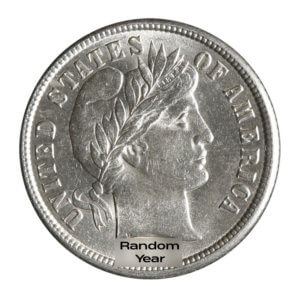 Barber dimes struck in the United States between the years 1892 and 1916 are regarded to be classic examples of the coinage of the United States. The Barber design was used on three distinct denominations of coins by the United States Mint. These coins were the dime, the quarter, and the half dollar. There are even specialty coin collecting groups that concentrate only on Charles E. Barber coins as their primary area of interest.

The value of your Barber dime ranges depending on common date and is in “Good” condition despite having heavy wear. Your coin’s worth improves dramatically if it is in “Extremely Fine” condition, which indicates that it has been conserved exceptionally well. A process consisting of a series of steps is employed to calculate how much money your coin is worth.

The Procedures That Result in Value:

The 1895-O is an extremely rare coin that was struck at the New Orleans mint. After it comes a series of dates from the San Francisco mint. Following the format of the value chart is an illustration of each combination of date and mintmark. In addition, to grasp the full potential of these famous coins, you should continue to grade their condition.

The artist who came up with the concept for the form of the Barber dime was Charles E. Barber, who served as Chief Engraver at the United States Mint. In addition, he was responsible for designing the obverses of the quarter or half-dollar coins, which each include an image of Lady Liberty. The letter “B” that represents his initial may be spotted at the truncation of a neck. This design first appeared on the dime in 1892 and remained in circulation until 1916, when it was replaced by the Winged Liberty Head, also known as the “Mercury” dime.

The obverse depicts Lady Liberty standing tall with her back to the viewer and facing to the right. Along the edge of the rim, the words “United States of America” are written in a circle around her head. You can see the year that the coin was issued at the very bottom of the design, just below the truncated head of Lady Liberty. The value of ONE DIME is ringed in the middle of a laurel wreath seen on the reverse of the coin. Because there was not enough place on the design for the tagline IN GOD WE TRUST, it was left out of the final product. However, Barber was able to incorporate the slogan into the designs of the quarter and the half dollar.

The 1894-S Barber dime is often considered to be the most valuable of all Barber dimes. As of the 30th of June in 1894, it was stated that just 24 Proof coins were struck. J. Daggett, who was the superintendent of the Mint at the time, had a particular strike of these coins struck for a small subset of bankers. There are only 12 known specimens of this species at this time. Each one of them fetches a price that is more than one million dollars at the auctions when they are offered.

The years 1892 through 1916 saw the production of Barber Dimes. The design of the Barber Dime, which replaced the Seated Liberty dime that had been in circulation for 55 years, was immensely popular. They got into circulation in considerable quantities and remained there for the most part, and the majority of the early dates are accessible mostly in lower grades.

The 1894-S dime, which was part of a special edition of just 24 coins and of which only 9 or 10 are believed to exist today, is one of the most famous rarities of all United States coins. The 1895-O coin, which had a mintage of 440,000, is considered to be the most valuable data of the normal issue coins.

We at GoldBuyersUSA are aware that selling the pieces may be a sensory experience for you. We make every effort to ensure that every one of our clients is completely content with our services. We are able to purchase every kind of Barber Dime coin. Send us the coins in exchange for cash today after requesting an evaluation kit and sending them to us.