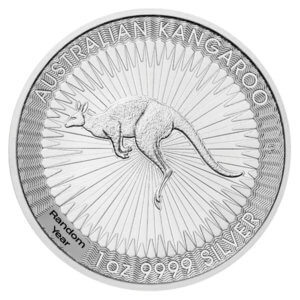 The rare Australian Kangaroo is one of the most gorgeous coins ever produced by the Perth Mint. It is also one of the rarest coins in the world, giving investors the opportunity for the greatest possible return on their investment.

This coin made its debut in 1993, becoming the very first silver bullion issue ever produced by the mint to use the design. 9999 percent of pure silver, in place of the typical amount.

The silver Australian Kangaroo product has pushed it into no doubt, should status for savvy investors all around the world because of its distinctive design showcasing the bouncy and vibrant red kangaroo.

The legendary Perth Mint is responsible for striking the silver bullion coins known as the Australian Silver Kangaroo. Each piece contains one troy ounce of silver. In addition to having the status of legal tender in Australia, it is also one of the very few legal tender silver coins to have its design updated annually. Because of this, as well as the fact that there are only so many of these coins minted each year, they have a numismatic value that exceeds the value of silver they contain.

In 1993, the first coin of the Silver Kangaroo series was created by the Royal Australian Mint, which is a department of the Australian federal government. In most cases, they have been released in two distinct varieties: a proof coin as well as a frosted, uncirculated coin. However, since 2003, coins with specific gold plating have been made available for purchase. You can easily obtain the 1 oz Silver Kangaroo coin in the Brilliant Uncirculated condition. This item is widely accessible.

How To Invest In Australian Silver Kangaroo Coins

Because it is composed of silver that has been refined to a purity of 99.99 percent, the Australian Kangaroo bullion coin is a convenient method to acquire actual silver.

Silver has a low correlation with the other financial assets; hence, ownership of actual silver, offers the kind of investment diversification that is desperately required.

The currency has a very huge mintage, thus it is already widely recognized and acknowledged by dealers all over the world. Because of the huge trade volumes, the secondary market for buying and selling coins is quite liquid because of the coin’s enormous mintage.

Silver coins have an ownership cost that is far less than that of gold coins, and for some people, purchasing silver coins is a more cost-efficient approach to building up a precious bullion coin holding.

Silver Kangaroos are compact and simple to travel, and their divisibility into 1-ounce increments makes it possible to exchange a portion of a holding, such as a tube containing 25 coins if this becomes necessary.

The Perth Mint produces new Kangaroo bullion coins, which are sold in uncirculated form and may be safely preserved in the unique tube and box packaging, in which they are issued. These coins are distributed by the mint in uncirculated conditions.

Incredible Detailing on the Reverse Side of Silver Kangaroo Coin

The aforementioned red kangaroo, which has been a prominent part of Australian currency for a very long time, can be seen bouncing over the design of the coin’s reverse side, moving from left to right. The kangaroo is not only the largest native terrestrial animal on the continent, but it also gives Australia one of its most lasting and easily known symbols. The kangaroo looms huge on the continent.

In addition to the loping animal, though, the reverse side of the coin features the practical element: a clever mechanism that is designed to prevent counterfeiters. When seen under a microscope, the letter A that is part of the inscription “Australian Kangaroo” has another, the smaller letter A written inside of it. A quality of exacting craftsmanship is required from the craftsmen working at the Perth Mint, and the fact that such a detail is practically hard to reproduce is a monument to that standard.

The image of Queen Elizabeth is seen on the reverse side of the Australian Kangaroo coin. Her Majesty’s portrait is featured on all of Australia’s coins that are legal tender. The portrait of the Queen is kept up to date during her reign so that it accurately reflects her current age. This edition is the fourth-generation representation of the character, which was designed by Ian Rank-Broadley in 1998.

We at GoldBuyersUSA are aware that selling the pieces may be a sensory experience for you. We make every effort to ensure that every one of our clients is completely content with our services. We can purchase every kind of Australian silver kangaroo coin. Send us the coins in exchange for cash today after requesting an evaluation kit and sending them to us.

Get Started
We use cookies on our website to give you the most relevant experience by remembering your preferences and repeat visits. By clicking “Accept All”, you consent to the use of ALL the cookies. However, you may visit "Cookie Settings" to provide a controlled consent.
Cookie SettingsAccept All
Manage consent