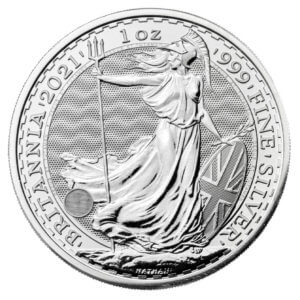 One of the most recognizable symbols of the United Kingdom is the silver Britannia coin, which has helped it earn a place of honor in the annals of British coinage history. 1997 was the year in which the coin was first circulated, and its initial issuance had a purity of 95.8%. The initial gold Britannia was issued by Royal Mint ten years prior, and its design characteristics were reflected in the 1-ounce silver version of the coin that was released at that time. Because of how popular the gold Britannia was, the Royal Mint decided to also produce a coin with the same design but made of silver. The quality of silver Britannia coin was raised to 99.9% less than two years after it was first introduced to the public. It goes without saying that the currency minted with 24 carats of silver had enormous appeal among collectors and speculators alike.

The price of silver at the spot market determines how much value there is in the coin. As a general rule of thumb, the coin’s potential sale value is about equivalent to the current spot price of one ounce of silver. In most cases, the purchase price will be slightly lower than the current market value of silver, if the coin is a collector’s edition and hence commands a higher price.

The mass-produced bullion variant of the coin has a low valuation attached to it because of its rarity. When purchasing from a reputable dealer, it is possible to qualify for substantial discounts on bulk orders of bullion coin. This is an additional benefit. The favorite aspect is that investors have an incredible chance to enter the market for precious metals at a cheaper price point by purchasing silver Britannia coins. This is one of the main selling points of these coins. On the contrary hand, a gold Britannia seems to be a coin that cannot be purchased due to its prohibitive cost.

One of reasons that investors have shown such a strong interest in purchasing the coin is the widespread belief that the price of silver will eventually go up in the not too distant future. As digital cars, solar power solutions, and other electronic items remain dominant in the marketplace, the usage of silver in industrial uses has increased over the years and it will continue to climb in the coming years.

Despite this, the amount of silver that is mined each year is at a record low. Investors who buy  Britannia coins today and hold on to them until the price of silver hits its all-time high can anticipate making large gains once the silver’s price reaches its zenith. Market experts predict that a price increase for silver is on the horizon.

On the reverse of the silver Britannia, just as it is on the gold version, is the iconic depiction of Britannia. It is possible that the Britannia icon originally conceived of as far back as Roman times. It depicts a female deity in the guise of a warrior, with a shield as well as a trident. This iconic photograph is a powerful illustration of the energy and bravery that characterizes the people of the United Kingdom. Jody Clark, a well-known designer, was responsible for the creation of the design elements that were employed inside the silver Britannia coin. The current monarch of the United Kingdom, Elizabeth II, is depicted on the obverse side of the coin. Since it was first minted, the currency has undergone several modifications to both its appearance and the process by which it is produced, including shifts in both its weight and size.

Silver Britannia coins are accessible in a variety of sizes, including one troy ounce, one-tenth of an ounce, one-half of an ounce, and one-quarter of an ounce. These fractional quantities have face values of fifty pounds, twenty-five pounds, and ten pounds respectively.