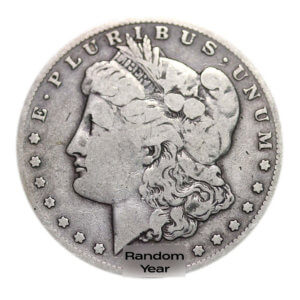 It is generally agreed that the Morgan Dollar is the most popular coin to collect and sell among those that have been produced by United States Mint. The Morgan Dollar was produced from 1878 – 1904 and then again in 1921. It was given the name of its engraver, T. Morgan (1845-1925), who was born in Great Britain. The total amount of coins minted were close to 657 million. Since 1918, almost half of all Morgan Dollars have been converted to silver bullion through the process of melting. Despite this fact, there are still roughly 275 million coins of this type in circulation; hence, there is no indication that supply will be scarce in the foreseeable future.

While investing in rare coins, such as Morgan Dollars, it is essential to take into account the origin of the grade, since this is one of the most significant aspects to take into account. The difference in price between a coin graded MS-63 and one graded MS-65 is substantial, so not all dealers including grading agencies use the same criteria to grade coins. Coins that are preserved in the slabs from PCGS, as well as NGC, are valued more than coins that are preserved in slabs from some lesser grading services. This is because PCGS or NGC have criteria for grading that are constant, stringent, and essentially objective.

How To Invest In Morgan Silver Dollar Coins

You should only make investments in the best mark specimens available because the Morgan series is available in typically higher grades than the vast majority of other series. You should put your money into Proof Morgans if you have the means to do so, as the value of these coins has increased substantially over the past fifteen years. The very high grades, those with an MS-65 or greater, are the next greatest investments after platinum. They are more expensive when compared to coins graded MS-60 to MS-63, although considering the age of the encapsulation their remarkable rarity makes them a worthwhile investment.

The Design of the Morgan Dollar

It had been much too long since the United States silver dollar coinage had been updated, and in 1876, a 30-year-old Englishman named George T. Morgan was hired as the newly appointed engraver at Philadelphia Mint. Morgan was up to the challenge. Before moving to the United States, Morgan completed his training as an engraver under the tutelage of the Englishman Leonard Charles Wyon.

Following a conversation in October with the Director of the United States Mint, Dr. Linderman, Morgan decided to enroll at the Philadelphia Academy of Art. He was aware that the Director of the Mint desired to have the image of Liberty shown on the silver dollar, a piece that would later come to be known as the Morgan dollar, so he realized that he needed to educate himself on the art of the country. There, he struck up a conversation with the American painter Thomas.

Morgan conducted several types of research based on Greek facial features, and he looked for a young woman from the United States to portray the Goddess of Freedom on the silver dollar. It was Thomas Eakins who put them in touch with one another, and Miss Anna Williams was a teacher. When Morgan encouraged her to pose, her initial reaction was one of reluctance. Back then, no self-respecting woman would ever agree to be a model for an artist. She was terrified that if the truth were to become out, she would be fired from her work, so she insisted on complete confidentiality. Morgan had Williams sit for him five times, ostensibly at the residence of Mr. Eakins. And by the beginning of 1877,  George T. Morgan had already developed a new design that would later be used for the dollar that would be known as Morgan.

After some time had passed, a reporter for a newspaper discovered Morgan’s Liberty’s true identity. Despite objections, the article was published. Williams’s worst fears were realized when she was let go from her teaching profession. She was fortunate enough to find another teaching position and continued to live in Philadelphia until the day she passed away in 1926, which was just 5 years after the final Morgan dollar was struck.

It is equally as crucial to locate a trustworthy means of selling your investment in precious metals as it is to find a source from which to purchase the metals. GoldBuyersUSA provides online tools to make your selling experience more convenient. Contact us if you want to sell the Morgan Dollar, and we will give you the highest price possible in return.